Facial symmetry plays a very important role in how the mind perceives beauty. While it’s estimated that 97% of people have some degree of facial asymmetry, severe asymmetry can distort the overall aesthetic of the face.

Due to its prominence, the nose plays a vital role in determining how symmetrical the face appears. Thus, a crooked nose negatively impacts the appearance of the entire face.

What is a Crooked Nose?

A crooked nose is one that features some degree of a curvature rather than following a straight vertical line down the center of the face. Crooked noses can vary in terms of severity, from barely noticeable to dramatically prominent. While some curvatures are only a cosmetic concern, many instances of a crooked nose can result in some form of breathing obstruction.

Crooked noses may be classified as C-shaped, I-shaped, or S-shaped – depending on their appearance.

What Causes a Crooked Nose?

The root cause of a crooked nose stems from issues relating to the cartilages, bones, and other tissues that make up the nose. This underlying scaffolding determines the appearance of the nose. The most common issue that alters the structure of the nose is some sort of trauma or injury (i.e. a broken nose). Other potential issues include birth defects, prior surgeries in the area, or tumors.

In some cases, a deviated septum can also impact the appearance of the nose to the point where it appears crooked. The septum is the internal partition wall that separates the nasal passages from each other. The top of the septum is the top of the nose. A deviated septum occurs when this wall leans over to one side, blocking that nasal passage. If the deviation extends to the top, the external nose will appear crooked. In some cases a deviated septum may cause frequent bloody noses. When severe, the deviation will block airflow and/or alter the appearance of the nose.

Can Exercises Fix a Crooked Nose?

There are numerous online resources preaching various facial exercises dedicated to fixing a crooked nose. While nose straightening exercises may sound intriguing, they simply will not work. This is because the nose is made up of bones and cartilages that will be unaffected through any type of exercise.

What Treatment Options Can Correct A Crooked Nose?

There are several effective treatment options, both surgical and non-surgical, for addressing a crooked nose. The most important factor in selecting the right treatment option is to understand the specific causes of the crooked nose. A skilled surgeon will assess the nose in order to determine and advise on the best course of treatment.

In some cases, dermal fillers such as Restylane can be used to correct a crooked nose. Sometimes referred to as “liquid rhinoplasty”, dermal filler injections can sometimes reshape the nose without the need for surgery. This option is 100% non-surgical, minimal discomfort, and requires no downtime. However, the results a liquid rhinoplasty provides are temporary and patients will need to undergo annual treatments in order to maintain their look.

Septoplasty is a surgical procedure dedicated to reshaping the septum, the wall between the left and right nasal passage. The procedure can correct a deviated septum and improve air flow through a previously blocked nasal airway. When the top of the septum is deviated it creates a crooked nose, so it must be straightened at the same time with functional rhinoplasty. When a septoplasty is performed in conjunction with a rhinoplasty it is referred to as a “septorhinoplasty”.

Case 1: Before & After I-Shaped Nose Correction Case 2: Before & After C-Shaped Nose Correction 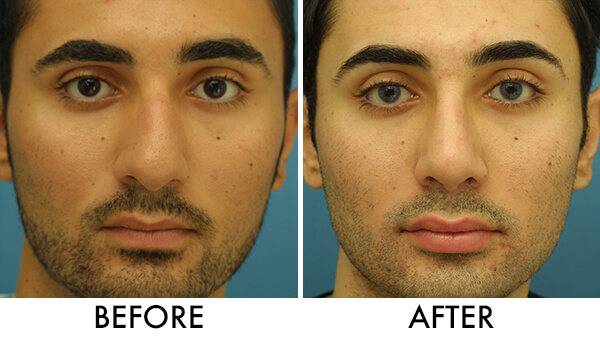 Case 3: Before & After S-Shaped Nose Correction The Difficulties of Correcting a Crooked Nose

Correcting a crooked nose is one of the more difficult forms of cosmetic nose enhancement for several reasons. First, most patients have other facial asymmetries which can make achieving a perfectly straight nose impossible. Although the surgery will improve how straight the nose looks, it may not be able to straighten it completely. This is why it’s so important for patients to select board certified surgeon who has specific experience addressing crooked noses.

Secondly, cartilage has a form of “memory” which can affect how straight the nose remains as it heals post-procedure. While the nose may be straight after surgery, the cartilage sometimes tries to move back to its original (curved) positioning. If trauma or previous surgery has contributed to the deviation, then the scar from those events makes cartilage straightening even more difficult. Various techniques employed during surgery can minimize the risk or re-deviation; the more experienced the surgeon, the less the risk of postoperative deviation. Very experienced surgeons have revision rates of less than 5% in primary cases, meaning that after one year of healing the likelihood of success is over 95% when it comes to both the function and the appearance of the formerly crooked nose.